Today firefighters are again observing the fire using a suppression strategy that prioritizes firefighter safety because the wind gusts are up to 45 mph over the incident. Firefighters will engage when risks have been mitigated. Smoke may be visible but is very minimal.

The fire is located in heavy concentrations of snags, standing dead, and dead down timber posing a significant safety risk,  Firefighters are observing the fire using a suppression strategy that prioritizes firefighter safety will engage when risks have been mitigated. Extracting an injured firefighter in this area would be extremely difficult because there is no aviation support due to high winds..

Firefighters are off the fire and will be returning in the morning. With tomorrows predicted change in temperatures and decreasing wind the plan is to use air support to assist  in suppression efforts.

Airtankers and helicopters are unable perform suppression operations because of high winds over the incident.  Fire is now estimated at 2 acres.

Type 2 Helicopter in route to fire with another on order along with two large airtankers and two SEATS. Also have a air attack on scene and a lead plane has been ordered.  Another 5 person module is in route.  Fire is now estimated at 1 acre.

Large Airtanker did one drop and the SEAT's did two drops, then were released.  Firefighters plan to come off the fire 8:00 pm and will return in the morning. 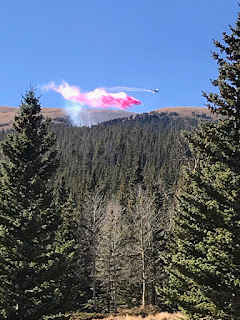 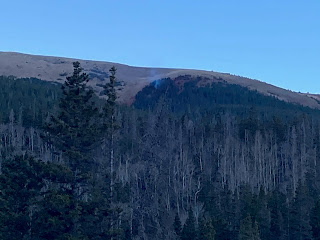